Where Can You Take a Girl

I ran into Tony winner, Cady Huffman, in December at Gypsy of the Year.   She choreographed the opening number and I was dancing in piece by Kristine Bergasse with a cast of my contemporaries.  It was great catching up with some old pals. The best part was partnering the spectacular Karine Plantadit – we've known each other for years but never had the chance to dance together.  Cady is producing and starring, with Vienne Cox, in a new webseries call Cady Did – which will premiere later this year.  At rehearsal for Gypsy she asked me to play her agent in the first episode.  Who would refuse?  She did a great job producing this show – very professional.  Felt just like a regular SAG gig and playing opposite the lady herself was a total hoot.  Can't wait to watch the first season.

Hello from PaperMill Playhouse. It’s nice to be back here for the first time since I played Sam in A Wonderful Life,  back in December 2006. The staff and crew here are always so friendly and they’re great at what they do. We opened the world premiere of Ever After, by Marcy Heisler and Zina Goodrich on May 31st and now it’s just three days until we close! It’s been fun and somewhat exhausting playing Flanek, The Gypsy King. It’s also been pure joy to be sharing the stage again with the tremendous Christine Ebersole. We did Connecticut Yankee together at Encores!, back in 2001. Christine played Morgan le Fay (and I played Galahad) and in Ever After, the real story of Cinderella, she is the overbearing step mother, Baroness Rodmilla de Ghent.

Fellow Aussie actor Tony Sheldon (Broadway’s Pricilla Queen of the Desert) plays Leonardo da Vinci, our stand-in for the fairy godmother of the Grimm Brother’s tale,  and the crowds just adore him. This production is the culmination of many years (maybe eight years?) of readings and workshops and I am so glad for Marcy and Zina that they have finally gotten this beautiful production up. 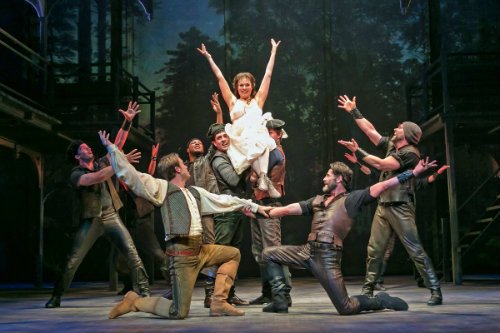 Next on the agenda for me is an experimental workshop of a new play by Charles Mee at the Signature Theater this July.